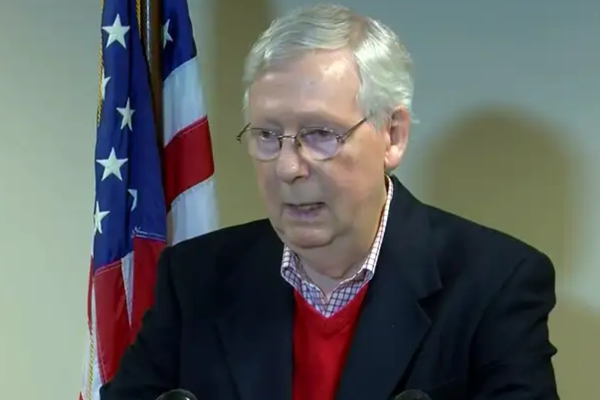 (thegatewaypundit) – Republican Senate Minority Leader Mitch McConnell of Kentucky is starting the new year making very clear whose side he is on–and it is not Republican voters. After betraying the incoming GOP House majority by negotiating a $1.7 trillion omnibus funding bill in the lame duck Congress last month to deny House Republicans the chance to control federal spending this year, McConnell is set to host Joe Biden in Kentucky on Wednesday at a “bipartisan” celebration of Biden’s $1.2 trillion infrastructure bill passed in 2021 with help from McConnell. NBC News was first to report on the McConnell-Biden event which will highlight a $1.6 billion bridge replacement project, funded by the infrastructure bill, to replace the Brent Spence Bridge connecting Ohio and Kentucky. Ohio Gov. Mike DeWine (R) and Kentucky Gov. Andy Beshear (D) are also expected to attend the event.

In November 2021, McConnell defended his support of Biden’s infrastructure bill in response to criticism by President Trump (excerpt via Business Insider):

Last month McConnell bragged he was “proud” to work with a “Democratic President, a Democratic House and a Democratic Senate” to pass the $1.7 trillion omnibus bill, touting the funding for Ukraine as the number one priority.