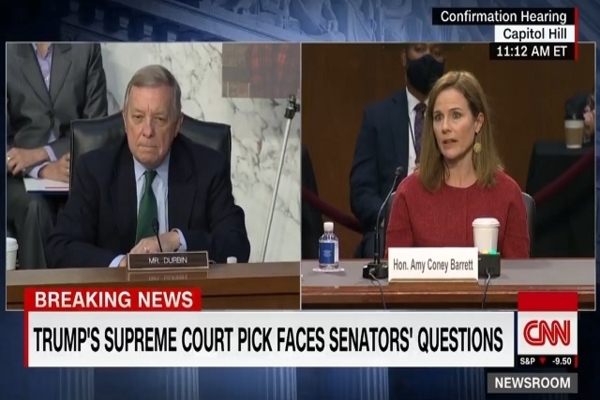 Judge Amy Coney Barrett said Tuesday during her confirmation hearing that she “wept” together with her adopted Haitian daughter about the death of George Floyd and suggested it was an example of “racism” but stopped short of saying America has “systemic racism.”

Partial transcript:
Senator, as you might imagine, given that I have two black children, that was very, very personal for my family. Jesse was with the boys on a camping trip out in South Dakota, so I was there, and my 17-year-old daughter Vivian, who was adopted from Haiti, all of this was erupting. It was very difficult for her. We wept together in my room. It was also difficult for Juliet, who is ten. I had to try to explain some of this to them.

My children, to this point in their lives, have had the benefit of growing up in a cocoon where they have not yet experienced hatred or violence. And for Vivian, to understand that there would be a risk to her brother or the sons she might have one day, of that kind of brutality, has been an ongoing conversation. It’s a difficult one for us, like it is for Americans all over the country.

[…] I think it is an entirely uncontroversial and obvious statement, given as we just talked about the George Floyd video, that racism persists in our country.
According to Hennepin County Medical Examiner Dr. Andrew Baker, George Floyd had a “fatal level of fentanyl” in his system on top of low levels of meth.

Baker “said that if Mr. Floyd had been found dead in his home (or anywhere else) and there were no other contributing factors he would conclude that it was an overdose death,” according to a memo from his office.

Legal filings from the attorney for arresting officer Derek Chauvin revealed Floyd had swallowed drugs during a prior arrest in May, 2019.

Video of his arrest shows he resisted arrest from the very beginning and refused to comply with police.