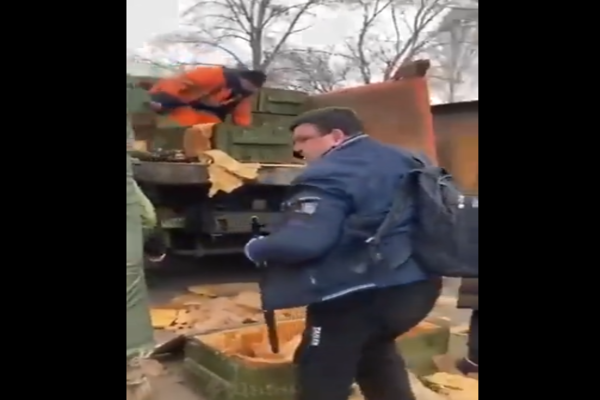 The Ukrainian Parliament greatly expanded the right to bear arms on the eve of the full-scale Russian invasion. A day later, when Russian troops began assaulting multiple major Ukrainian cities, President Volodymyr Zelensky announced the government would give anyone willing to fight the Russian military a weapon, no questions asked.

Reznikov issued an update, shared by the Ukrainian armed forces on social media, stating that 18,000 firearms “and corresponding combat kits,” meaning ammunition, were in the hands of Ukrainian citizens, and again inviting anyone willing to fight against the invasion to ask for weapons.

“We have already managed to break the plans of the Russian occupiers,” Reznikov declared in his update as posted to Facebook. “Now it is important to destroy the sea of lies created by the Kremlin. And this will be the end of a serial killer and rapist attacking neighbors.”

The last line, presumably, is a reference to Putin. The Ukrainian government has not at press time issued any reports of the use of rape as a weapon of war in the Ukrainian conflict.

The Kyiv Independent, an outlet based in the capital, had reported by the end of Thursday that the government had distributed 10,000 weapons. Putin opponent and former oil oligarch Mikhail Khodorkovsky published a video on social media appearing to show mass distribution of weapons in Kyiv.

“In Kyiv, handing out weapons to people,” the caption on the video read. The video showed large trucks full of cartons that appeared to be holding guns with plain-clothed people, presumably civilians, grabbing guns out of them.

Khodorkovsky, whose personal wealth declined significantly after openly opposing Putin in his home country, made a please on Thursday to distinguish the Putin regime from the Russian people, who have taken the streets of their cities by the thousands to oppose the invasion of Ukraine.

“We need to be clear that it is Putin and his entourage who started the war in order to hold onto their power – not the Russian people,” Khodorkovsky said on Thursday. “Unleashing a war of aggression and using the armed forces for personal gain signifies that a junta led by Putin has seized power in Russia.”

“Friends, compatriots, I urge you to use every opportunity to oppose this war,” Khodorkovsky said. “The war will be fatal for the development of Russian society and a critical factor for Russian statehood.”

The weapons giveaway began with the passage of a law in the Ukrainian parliament on Wednesday that established the basic right of a free private individual to own a gun. According to the state news agency Ukrinform, the law now allows for the “acquisition, possession, alienation, carrying, transportation, repair, use of civilian firearms and ammunition.”

Zelensky issued a simple call on Thursday, shortly after the Russian military began attacking Kyiv, Kharkiv, Mariupol, and other major cities, for civilians to come to the government, grab a gun, and start fighting.

“We will give weapons to anyone who wants to defend our country,” Zelensky said in an announcement on Twitter. “Be ready to support Ukraine in the squares of our cities.”

Even prior to this announcement, reports indicated that Ukrainian civilians had begun buying firearms in droves. According to the Guardian, weapons shops saw long lines winding outside their doors shortly before the assault began.

“Gun shops have sold out of some weapons, such as AR-10 and AR-15 assault rifles, with business now exceptionally busy,” the report noted, adding that “most Ukrainians – boys and girls – learn how to shoot at school” and nearly half a million Ukrainians have combat experience.

As of Friday morning, the Ukrainian military claimed that the Russian initiative was stalling. The Russians have openly declared victory over two minor areas: the Chernobyl Nuclear Power Plant, an irradiated region where the government heavily discourages residency, and Snake Island, a small Black Sea territory defended by 13 Ukrainian soldiers, all of whom chose to confront the Russians rather than surrender. All 13 died.

The Ukrainian Defense Ministry announced on Friday that it had counted over 1,000 Russian soldiers killed in the invasion so far, compared to the 137 “heroes” – seemingly both civilian and military – Zelensky announced that Ukraine had lost as of Thursday night. The Russian government has not, at press time, refuted the Ukrainian report or provided an alternative count.