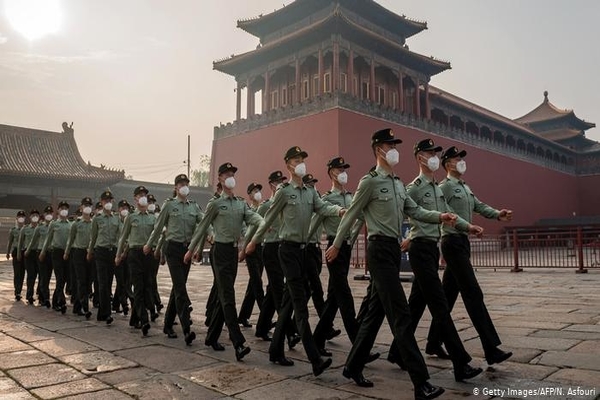 (AFP) — Biting new Chinese trade tariffs have stoked fears that Australia’s virus-weakened economy is being targeted for political retribution and the two countries may be sliding into a shadow trade war.

Since Canberra pointedly demanded an investigation into the origins and spread of the coronavirus, the number of Aussie businesses being squeezed in China has exploded.

Crates of Australian rock lobsters have been left to rot at a Chinese airport, and mountains of coal have been stuck in Chinese ports.

On Friday, Beijing turned the screw again, hitting Australian wine exports with punitive tariffs of up to 212 percent, essentially closing off a US$1 billion market.

In total, 13 sectors have been targeted according to a running tally from Jeffrey Wilson, a trade expert with the Perth USAsia Centre think tank.

Wilson estimates the total value of Australian goods at risk at around US$40 billion.

It is an eye-watering number that represents 12 per cent of all Australia’s exports, in a country experiencing its first recession in 30 years.

Beyond the fear, fury and headline-grabbing restrictions, trade experts say the overall economic impact for Australia has so far been more modest.

“The number of industries that have been sanctioned is large, but the direct economic impact to the economy as a whole in Australia is going to be significantly smaller,” said Wilson.

He estimates the actual economic impact may be US$2 billion to US$4 billion, and perhaps less if affected firms look for other export markets.

Curbs on Australian beef have affected only four meat processing plants, three of which are not Australian-owned.

And China’s suggestion that its tourists and students boycott Australia poses only a limited threat while there is a virtual ban on travel Down Under during the pandemic.

“The action on coal is something that comes up this time every year, because China has this soft quota on coal imports,” said Stephen Kirchner, a trade and investment expert at Sydney University’s United States Studies Centre.

“It’s a calendar-year quota, so you start to bump up against the quota round about this time.”

In the two hardest-hit sectors — barley and wine — where an Australian export market could be wiped out entirely, the “retaliation” may have happened even if Canberra and Beijing were best of friends.

Scott Waldron of the University of Queensland has studied Chinese agricultural tariffs extensively and believes the sanctions are as much about China’s security goals, shaping its own economy and protecting local jobs.

Beijing has mulled restricting Australian barley imports since 2018 at the latest, amid worries that China — which produces only around 20 per cent of the barley it needs — is overly dependent on imports.

“The wine case is very similar,” Waldron said. “China’s had a really active industry policy for wine for more than a decade” and an industry body that is increasingly keen to ringfence its home market from imports.

Waldron points to the precedent in Beijing’s use of domestic subsidies and import quotas to reduce dependence on US corn, from a vulnerable 90 per cent imported to around nine per cent today.

“There are domestic trade and industry policy reasons why they are doing these things,” he said.

While that may hurt individual Australian companies, the higher cost for Australia may be political — being made an example of by its largest trade partner.

“This is really about sending a message to other countries,” said Wilson. “‘Keep your mouth shut or we’ll do to you what we’re doing to Australia.’”

Officially, China says the disputes are technical and unrelated.

But through leaks and state media commentary, Beijing has hinted the trade problems are a result of what the Global Times called the “deteriorating China-Australia relationship”.

“They will never draw that nexus explicitly,” said Kirchner. “But they do enough to draw it implicitly.”