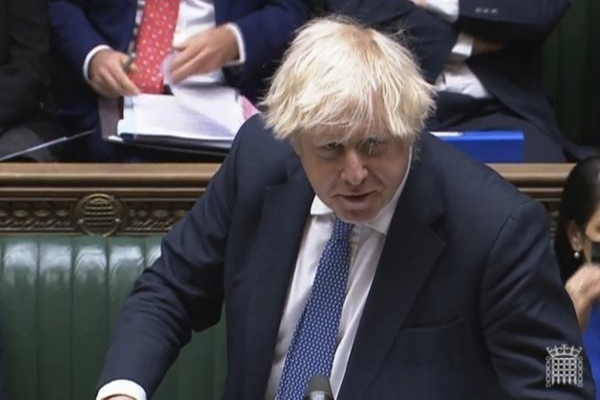 (breitbart) – Boris Johnson told a laughing group of Conservative members they should use the party conference to exchange “ideas… and, indeed, bodily fluids” in the same month the government instructed the public to exercise restraint in seeing other people and to wear masks in “crowded environments”.

Footage provided by Breitbart London shows British Prime Minister Boris Johnson, in his role as leader of the governing Conservative Party, giving a speech to a packed room of members at this year’s party conference and encouraging them to have a fun — and intimate — time. Speaking to the laughing activists, the prime minister said: “…at this old fashioned, proper Conservative party conference… exchange ideas, warm embraces, and indeed, bodily fluids”.

The behind-closed-doors exhortation to excess takes on a ‘rules for thee but not for me’ flavour given what Johnson’s government was saying in public around the time of the comments. The October 4th speech came amid the government seeding the idea of an October “fire-break” or “circuit breaker” lockdown narrative in the press.

Just sixteen days after the Prime Minister’s body fluid comments the government’s coronavirus press conference saw the health secretary warn that if people wanted “to keep your freedoms” they would have to act responsibly and do as they were told by the government.

Prime Minister Johnson justified his advice at the conference by claiming party members were able to “exchange bodily fluids” partly “because of Brexit”, and “partly because of the vaccine task force”, but mainly because we have a Conservative government “that gets things done”.

This footage comes amid rising public frustration over the apparently hypocritical attitude towards both the spirit and letter of the government’s lockdown orders among members of the government itself.

Health Minister Matt Hancock was quickly removed from office earlier this year after it was revealed he had been engaging in an extra-marital affair with a government colleague in breach of his own lockdown rules. Today, controversy swirls around three reported lockdown-busting Christmas parties at the prime minister’s official residence at 10 Downing Street.

The prime minister, it is alleged, has attempted to “dead cat” — parlance for killing a negative news story by dropping an even worse one to cause a distraction — the controversy by announcing a new lockdown for England, with the new rules including the introduction of vaccine passports in England for the first time. Speaking at an impromptu government press conference on Wednesday night, just hours after his erstwhile press secretary fell on her sword and resigned over her relatively minor role in the Christmas party story, the prime minister even discussed mandatory vaccination for the first time in public.

These new regulations have been met with outcry from both the left and right-wing of British discussion. Beyond public figures like ex-footballer turned left-wing pundit Gary Neville and Brexit boss Nigel Farage pouring scorn on, and encouragement to reject the rules, there is also the beginning of a growing Conservative backbench rebellion in the works.