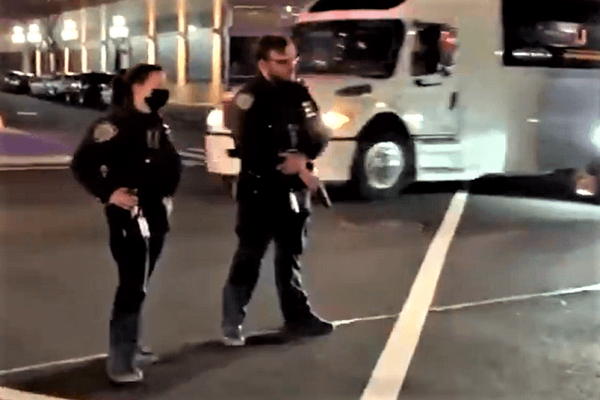 (breitbart) – New York City police officers arrested nine Black Lives Matter protesters in Brooklyn Saturday night. The protesters came to call for the firing of an NYPD officer who pulled a handgun on BLM protesters earlier in the week.

A large group of BLM protesters gathered on Saturday night near the Barclays Center to call for the firing of an officer who drew his service weapon during another protest earlier in the week, the New York Post reported. The officer reportedly drew his weapon after being confronted by the demonstrators for not wearing a mask during the COVID-19 pandemic.

The video shows the officer appearing to hold his pistol close to his body and pointed safely to the ground. He reholsters after assessing the situation and draws what appears to be pepper spray from his duty belt. He later deploys an ASP (expandable baton) as the crowd becomes more aggressive.

The Post stated that NYPD officials nearly immediately began warning the crowd via loudspeakers that they would be arrested if they continued to block the roadway. Officers formed a line and force protesters onto sidewalks as they marched to the 84th Precinct headquarters where the officer in question is reported to be stationed.

Protesters told News 12 reporters they are being treated unfairly by NYPD.

“We’re under attack every time we peacefully protest,” a man identified as Desmond told the TV news outlet. “Supremacists run up on the Capitol, kill police officers, steal documents and they still make it back home. We don’t even make it off the streets.”

The officer in question is said to have drawn his pistol after BLM protesters became aggressive toward him for not wearing a mask. The officer’s action led to a petition drive calling for him to be fired.

Police officials responded to the incident involving the officer drawing his weapon and said it “remains under internal investigation.”