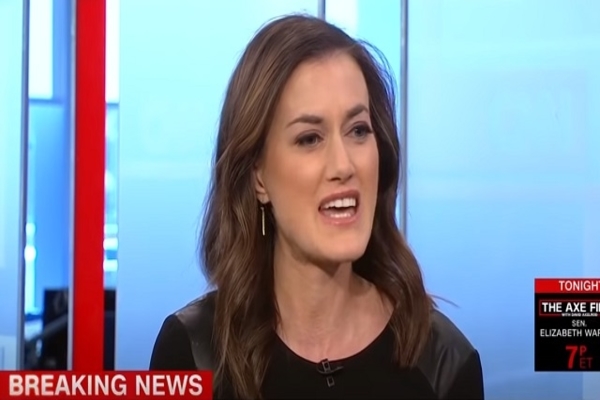 (IL) – Samantha Vinograd, the Department of Homeland Security’s new acting assistant secretary for counterterrorism and threat prevention in the Office of Strategy, Policy and Plans is a former CNN analyst who said the idea of Americans trying to preserve their heritage makes her “sick.”

While appearing on CNN in March 2019, Vinograd slammed President Trump for giving a speech at CPAC about the importance of preserving our heritage.

“His statement makes me sick, on a personal level,” Vinograd said. “Preserving your heritage, reclaiming our heritage, that sounds a lot like a certain leader that killed members of my family and about six million other Jews in the 1940s.”

“But our national security level, the president talks about preserving our heritage as a catch-all for implementing policies that misallocate resources,” Vinograd continued. “He pretends there are massive flows of illegal immigrants coming over our borders and spending billions of dollars on a border wall emergency instead of paying attention to real national security threats. He sounds a lot like despotic leaders who talked about white heritage and white nationalism around the world and putting resources in the wrong place and pretending there are foreign people trying to influence our country in a way that just isn’t accurate.”

Vinograd cares deeply about preserving her own heritage as she noted in a 2017 article in Marie Claire where she railed against Trump’s travel ban and blamed America for the Nazis killing her family in the Holocaust:

As the daughter of a Holocaust survivor, I know far too much about what closing borders to refugees means. And as a four-year veteran of the White House National Security Council, I know about how to make policies that keep us safe from real threats, not imaginary ones. I also know that the amateur policy-making behind the misguided Executive Order that President Trump signed on Friday—which was, let’s not forget, International Holocaust Remembrance Day—will not make us safer. It will actually make us less secure.

[…] I am alive today because my father survived the Holocaust by hiding on a farm and joining the French resistance. His whole family—and about 6 million other Jews—did not survive. The United States could have helped by offering sanctuary, but chose not to let in as many Jewish refugees as it could. We even turned back a ship of refugees docked right by our coast—so close they could see the lights of Florida—and sent them back to Europe and the Nazi killing machine.

The Executive Order that President Trump signed on Friday would similarly abandon refugees to persecution, and in some cases death. My father did not survive the Holocaust for this.

Vinograd will be working together with DHS Secretary Alejandro Mayorkas and DHS’s top counterterrorism official, John Cohen, on “counterterrorism” and “threat prevention,” aka labeling the American people as “terrorists” in order to strip them of all their rights.

The Department of Homeland Security’s intelligence arm is getting new leadership.

DHS Secretary Alejandro Mayorkas announced Friday morning that John Cohen, the department’s top counterterrorism official, will take the helm at DHS’ Office of Intelligence and Analysis in addition to his current role. POLITICO obtained the announcement Mayorkas sent to the department.

[…] Mayorkas brought him back to DHS, where he has focused on the department’s efforts to combat domestic terrorism. Earlier this year, DHS stood up a new team in the intelligence office to focus on that specific threat. And late last month, Cohen told members of Congress in a closed-door briefing that the department was concerned about the spread of the conspiracy that Trump will be reinstated as president in August.

Mayorkas’ letter also announced that Samantha Vinograd, currently the department’s senior counselor for national security, will become acting assistant secretary for counterterrorism and threat prevention in the Office of Strategy, Policy and Plans.

The announcement said Vinograd previously worked in government for nearly a decade, including as director for Iraq on the Obama administration’s National Security Council. More recently, she worked at Goldman Sachs and Stripe. She also provided on-air national security commentary for CNN.

In addition to being sickened by our country and our heritage, Vinograd was a top Russiagate conspiracy hoaxer who went so far as to claim the Mueller report was “a gift to the government of Russia” after it failed to back up her baseless conspiracy theories.