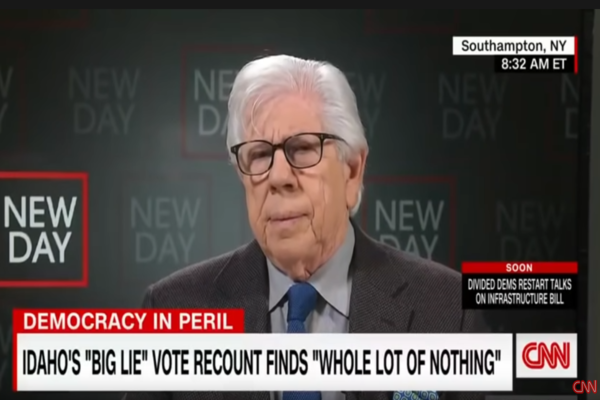 Bernstein said, “Democracy is in peril because the Republican Party has become the party of Trumpism and the party of disenfranchisement. What we have seen in Idaho, what we have also seen in Arizona, in these supposed recounts ordered because of supposed voter fraud, is it doesn’t exist. It is part of the Big Lie. The Big Lie is not just about the lie that Donald Trump did not lose the election a few months ago, but rather it looks toward … 2024 and the idea that we are going to have another, quote, rigged election. They’re setting this up so that there can be no legitimacy in our electoral process.”

He added, “The Republican Party has been taken over by this movement, that is the most radical political movement of our lifetime, that has come to power in any form in Washington, in our state legislatures. I think what we really need to acknowledge here is that we are in a civil war in this country. We are in a cultural civil war, such as we have never seen since 1860 to 1865. And that the radicalism of the Republican Party today is almost comparable to a secessionist movement in this country because of what the Republican Party now advocates. Trumpism doesn’t need Donald Trump anymore. He’s fanned the flames, he’s ignited them and the movement, and we need in journalism, in particular in the media, to start looking at what’s going on in the country outside of Washington.”