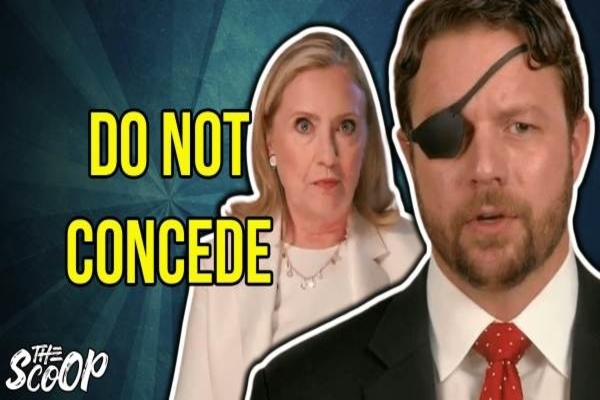 Clinton recently stated, “Joe and Kamala can win by three million votes and still lose. Take it from me. So we need numbers overwhelming. So Trump can’t sneak or steal his way to victory.”

Clinton said, “In the recent Michigan primary, I was told in Detroit, the Republicans had 40 lawyers challenging absentee mail-in voting. And a local reporter talking to one of the lawyers he knew was told it was a dry run, uh, for November. So we’ve got to have a massive legal operation. I know the Biden campaign is working on that.”

Congressman Crenshaw said, “It’s eerie. It’s eerie is the word and how bold she is with just laying out their plan like that. And we all know that’s the plan, right? Create as much chaos around elections as possible. You should find it very suspicious, by the way, that the election, our institution of voting is the one thing Democrats don’t want any regulation on. Why is that? And what they’ve done is they’ve built a narrative. Don’t concede. Universal mail-in ballots. No voter I.D. You know, they’ve started to build a narrative that if Donald Trump gets elected, it’ll be illegitimate. And now they’re laying out their plan. OK. What’s interesting about them, too, is, is this. You know, if we’re all being honest and you just got a bunch of problem solvers in a room and said, hey, we want an election that is verifiable and secure. So we all know that our vote counts. “

Rep. Crenshaw continued, “Obvious elements of that would be in-person voting and voter I.D. Everybody would agree on those commonsense elements. So you should find it very suspicious that these are the things that Democrats fight against the most. Why is that? It’s very, very strange. And it’s because they want to create chaos in the elections. They want to be able to tinker with the chaos and claim victory even when they didn’t win.”