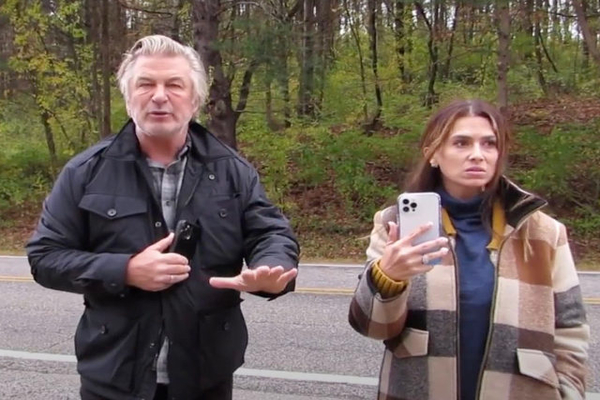 (breitbart) – Alec Baldwin spoke to photographers on the side of a road in Vermont on Saturday, where he told paparazzi that Rust cinematographer Halyna Hutchins — who he killed last week while filming the movie Rust — was his “friend.”

“I’m not allowed to make any comments, because it’s an ongoing investigation,” Baldwin told photographers. “I’ve been ordered by the Sheriff’s department in Santa Fe. I can’t answer any questions investigation. I can’t.”

Last week, while on the set of Rust, Baldwin was rehearsing with a gun that he was told did not contain live ammunition. The actor later pulled the trigger, fatally shooting Halyna Hutchins and wounding director Joel Souza.

Actors and crew members on set on of the movie “Rust.” Insider Edition/Serge Svetnoy/YouTube

As Baldwin continued talking to photographers on Saturday, he was seen snapping “excuse me” at his wife, Hilaria, who appeared to try to speak with him while he was talking to cameramen.

After being asked how the meeting went with Hutchins’ husband Matthew and her son, Baldwin said, “I wouldn’t know how to characterize it. They’re mortified.”

Hilaria then blurted out, “You guys, you know what, no details.”

“Do me a favor, I’m going to answer the question,” Baldwin then said to Hilaria.

The guy is overwhelmed with grief. This is something that, you know, there are incidental accidents on film sets from time to time, but nothing like this. This is a one-in-a-trillion episode. It’s a one-in-a-trillion event. And so, he is in shock. He has a 9-year-old son. We are in constant contact with him, because we’re very worried about his family, and his kid.

“As I said, we’re eagerly awaiting for the sheriff’s department to tell us what their investigation has yielded,” Baldwin added.

When asked if he will ever again work on another film set that involves firearms, Hilaria was seen shaking her head no, but Baldwin replied, stating, “I couldn’t answer that question. I really don’t have any — I have no sense of it at all.”

The actor went on to say that while fatal shootings on film sets are extremely rare, he is nonetheless “extremely interested” in “an ongoing effort to limit the use of firearms on film sets.” Baldwin also admitted that he is “not an expert in this field.”

“So, what has to happen now is we have to realize that when it does go wrong — and it’s this horrible, catastrophic thing — some new measures have to take place,” the actor insisted. “Rubber guns, plastic guns, no live, no real armaments. But that’s not for me to decide.”

“It’s urgent, it’s urgent that you understand, I’m not an expert in this field,” Baldwin affirmed. “So, whatever other people decide is the best way to go. In terms of protecting people’s safety on film sets, I’m all in favor of it, I will cooperate with that in any way that I can.”

After the photographers asked if he believes production of Rust will ever start up again, Baldwin replied, “No, I don’t.”

“So just do me a favor — you know, man, my kids are in the car, crying,” Baldwin said to the paparazzi before leaving.

While it remains unclear, it appeared that Baldwin pulled over on the side of a road to talk to the photographers, who were following him while he was in a car with his family.

“As a courtesy to you, I came to talk to you,” the actor added. “I’m not allowed to comment on the investigation. I talk to the cops every day.”

Both Rust head armorer Gutierrez-Reed and assistant director Dave Halls have also been under heavy scrutiny in the past week, as they were the one of the few people who handled the firearm before it was given to Baldwin.

It has been reported that Gutierrez-Reed has only worked on two film sets as head armorer — The Old Way and Rust — and that the 24-year-old had been the subject of numerous complaints while on the set of The Old Way, and had infuriated the film’s star, Nicolas Cage, who reportedly yelled “you just blew my fucking eardrums out!” at Gutierrez-Reed while on set.

Gutierrez-Reed broke her silence in a statement issued by her attorneys on Friday, in which she blamed producers, adding that she has “no idea” where the live rounds of ammunition came from, and that people have “slandered” her to the media.

As for Halls — who handed the gun to Baldwin and told him it did not contain live rounds — it has been reported that the assistant director was fired from a previous job after a gun went off on a set and wounded a member of the film crew.

On Wednesday, investigators said there was “some complacency” in how weapons were handled on the movie set, but that it’s too soon to determine whether charges will be filed.