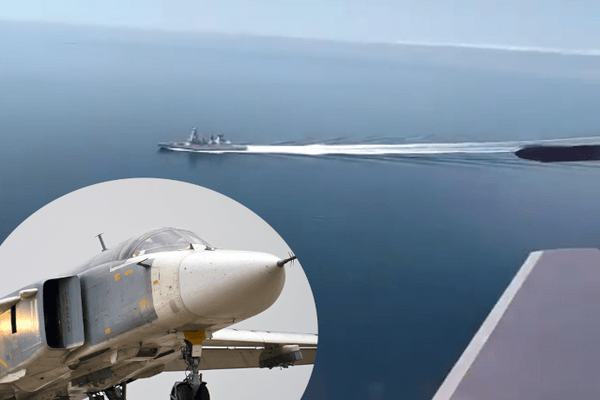 (breitbart) – Spokesmen for the Russian government have said that if warnings about not entering their waters are ignored their weapons will be “right on target” in future, the latest escalation over the disputed ownership of territorial waters in the Black Sea.

Russia has continued to push statements into the public domain since it buzzed a British warship — and, they claim, dropped “warning” bombs in its path — on Wednesday. Britain denied the use of weapons even took place, noting that while pre-announced Russian naval exercises were taking place nearby, no weapons were aimed at the British.

As well as summoning the British defence attaché in Moscow, the Russian Presidential Press Secretary Dmitry Peskov has slammed the British for sailing in disputed waters Russia claims as its own.

Peskov accused the British of staging a “deliberate and prepared provocation”, reports Interfax. He even claimed, contrary perhaps to the expectations of some, that it was “at odds with international law”.

Russia’s Deputy Foreign Minister Sergei Ryabkov was even more forthright in his comments, reported by the Associated Press, that Britain’s HMS Defender should be renamed HMS Attacker and that by testing Russia, the UK was “taking high risks”.

Russia would be more violent in response to ships entering the water it claims as its own, he said, commenting: “we may drop bombs and not just in the path but right on target”.

The British, for their part, have said people should not get “carried away”.

While the exact events of Wednesday afternoon in the Black Sea are disputed — Russia claims warning shots were fired at a British warship and Britain denies this happened — it is certain that HMS Defender sailed from Odesa in Ukraine to Georgia, passing close by Crimea as it did so.

The United Kingdom, like most nations worldwide, recognises Crimea as rightfully Ukrainian territory, and consequently the waters surrounding it as Ukrainian. Furthermore, it asserts that the route it took was the shortest between two points and that it acted within international law.

Russia, on the other hand, claims Crimea as its territory. It has militarily occupied Crimea since 2014 and is in the process of colonising the area, but the international community sees Russia’s annexation as illegal. Consequently, Russia insists that the British ship actually entered their waters on Wednesday.

HMS Defender was, in effect, conducting what are generally called in military circles a freedom of navigation operation. In cases where waters are disputed or a belligerent is attempting to close access — particularly in strategic waterways — powerful naval warships can be sailed through. If the cruise is unopposed, it is a message to others that the claimant will not actually resort to violence to back up threats, and the waterway is open for civilian and merchant traffic.

Such freedom of navigation cruises are becoming more common in Asia, where China has been for years pursuing a policy of forcefully exerting claims over strategic islands and reefs, which if accepted by the international community would cede to them huge swathes of ocean territory. This could be deleterious to other nations and navies if that sea space were denied to them.

To oppose these claims and to keep these sea lanes of communication open to the flow of merchant ships which carry goods and materials worldwide, NATO ships frequently transit the waters. Perhaps the most significant upcoming freedom of navigation operation on the horizon is Britain’s new carrier battle group, which will navigate the South China Sea to assert its right to be there.

Responding to Wednesday’s cruise, British Prime Minister Boris Johnson insisted it was “entirely right” and “wholly appropriate” for HMS Defender to act as it did and that the United Kingdom does not recognise Russia’s annexation of the Crimea. The prime minister explicitly said that the ship was pursuing freedom of navigation.