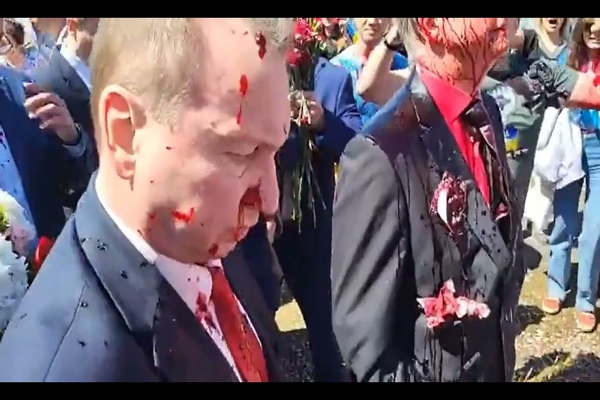 (breitbart) – The Russian ambassador to Poland was surrounded by protesters and dashed with lurid, blood-like paint during a World War Two commemorative event in Warsaw on Monday.

Ambassador Sergey Andreev was attending a wreath-laying at a military cemetery in Warsaw, Poland, to commemorate the Russian-observed anniversary of the end of the Second World War when he was struck with paint on the face, chest, and shoulders.

Surrounded by a group of men and women carrying Ukrainian flags and chanting “fascist”, Russian ambassador Andreev was struck several times by thrown packets containing red paint or dye. The Associated Press claims the protesters that met Andreev numbered in their hundreds, and that Polish police officers assisted the ambassador in getting away.

Andreev was carrying a wreath at the time he was struck with the paint and left the cemetery, the resting place of over 21,000 Soviet war dead, without planting the wreath. While most European countries in Europe and the United States recognise the 8th of May as the anniversary of the end of the Second World War in Europe, Russia has always marked its own Victory Day on the 9th instead, reflecting the German letter of surrender having reached Moscow a day later.

Russia’s international standing has collapsed this year following the intensification of their longstanding invasion of Ukraine, and today’s demonstration at the Soviet cemetery in Warsaw is not the first time Russian diplomats abroad have been the focus of protests over the regime they represent.

In March, the driver of a goods truck rammed the gates of the Russian Embassy in Dublin, Ireland and knocked them down, for example.

As the driver was led away by police, he was heard to say to gathered protesters: “I’ve done my bit, lads”.

In Romania, there was an apparent attempted firebombing when a car filled with several containers of “flammable liquid” was rammed into the gates of the Russian embassy. Although the vehicle was not strong enough to break through the gates, the vehicle did explode into a ball of flame, killing the driver. The Russian government blamed the event on “anti-Russian hysteria”.

In Lithuania, a European Union member which shares a land border with Russia’s Kaliningrad Oblast, a diplomat was reportedly assaulted, Russia claimed.

The Kremlin demanded the Baltic state do more to protect its diplomatic staff: as it happened, Lithuania expelled Russian diplomats from the country not long after.