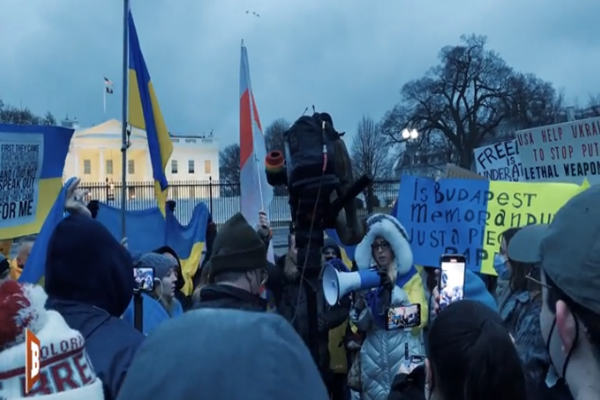 (breitbart) – Hundreds of supporters of Ukraine gathered in front of the White House on Thursday to demand U.S. President Joe Biden issue more impactful sanctions against Russia in response to Russian leader Vladimir Putin launching an attack on Ukraine this week.

The protesters demonstrated for hours Thursday evening in next-to-freezing temperatures and rain in Lafayette Square Park, just beyond the White House lawn, yelling chants condemning Putin and calling for more action from Biden.

“President Biden, please remember that Putin and [Belarusian President Alexander] Lukashenka are criminals. The only language they understand is language of force. We need stronger sanctions. Ukrainians appreciate the help that you provided and sanctions that already applied, but we need stronger sanctions to stop Putin,” one protester announced to the crowd of several hundred.

Chants broke out throughout the event of “cut Russia off,” “USA with Ukraine,” “do not let democracy die,” “stop Putin now,” “Crimea is Ukraine,” and more.

Asked about Biden’s sanctions response, one individual named Yevgeniy told Breitbart News, “I don’t feel they are adequate. They will feel the difference only in years. They need to feel it now. They need to start feeling it now.”

“Russian banks were prepared for sanctions. They knew about the invasion for months. They are prepared. These sanctions do nothing for them,” he added.

Biden detailed Thursday what he described as “strong sanctions” on Russia, which included cutting off major Russian banks from the U.S. financial system and limiting exports to Russia, repercussions that came after Biden indicated in January that sanctions against Russia would depend on the severity level of the invasion into Ukraine versus sanctions for any invasion at all.

Standing with Yevgeniy at the protest was Nadiya Shaporynska, the president of the group U.S. Ukrainian Activists, who emphasized that thousands of Ukrainian civilians and service members have been killed “during this war, which Russia started in 2014,” when Russia invaded and annexed the peninsula Crimea at the start of heightened conflict between the two nations.