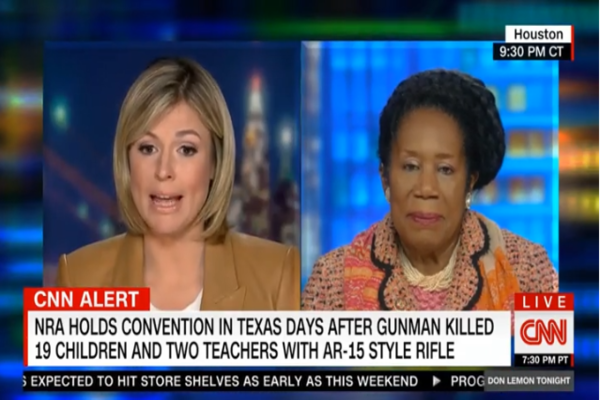 (breitbart) – On Friday’s broadcast of CNN’s “Don Lemon Tonight,” Rep. Sheila Jackson Lee (D-TX) argued that it has been proven that if a shooter “has weapons of war, and has the unbelievable automatic weapon,” then a law-abiding citizen with a gun responding “doesn’t work.”

Jackson Lee said, “We have no universal background checks here in the United States or Texas. And so, right in my district, in the NRA convention, they were selling guns without background checks at the private gun shows. They don’t care about domestic abuse. They don’t care about intervention on violence, no laws. And they don’t have any red flag laws and they certainly have not banned assault weapons. So, what I would say is that our state is a partner in the massacres that have occurred, from El Paso, to the church, to now this devastating blow to America’s own dignity. Because they have let down their people. And I, for one, will not tolerate this exhausting and poor response, which includes Donald Trump’s absolutely absurd comment that what you need when you see guns is a good guy with a gun. Well, I will tell you that it’s evidenced that if that perpetrator has weapons of war, and has the unbelievable automatic weapon, it doesn’t work.”