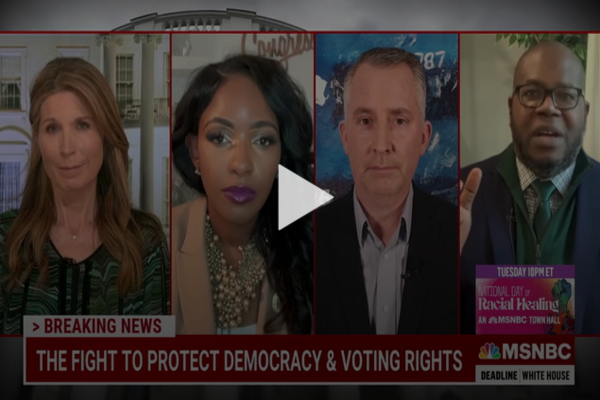 (breitbart) – MSNBC contributor Jason Johnson said Monday on “Deadline” that Republicans pass voting laws because many white people “would rather have their own lives inconvenienced than run the risk of black people being on an equal plane.”

Johnson “When Republicans send their random disingenuous gaslighting tweets, I just sit back and say it’s going to be the exact same thing next year. Unless there is a radical change in how Americans decide to see their government, and that comes from the ground, and that comes from the people in office. Unless people recognize that our current democracy isn’t just under threat because of terrorists, isn’t just under threat because of a former president, but is under threat because you have a significant number of people in the House and Senate who don’t actually believe in a functional multicultural democracy, then we will continue to have these conversations on MLK Day about what we wish was happening, but the people in the position to make the change don’t have the strength and the ideological creativity to make any of those dreams come true.”

He added, “I don’t think you can take partisanship out of it because, really, the partisanship is just a proxy for racism. I mean, let’s be clear. When you have voter suppression laws in a place like Ohio, you have, and we’ve seen this sociologically, that there’s a certain segment of white people in America who would rather have their own lives inconvenienced than run the risk of black people being on an equal plane. Because frankly, all these voter suppression laws they hurt white people, too. Right? The intention is to keep black people from voting, but it inconveniences everybody. I am very sure that somebody living in Lorain, Ohio, doesn’t like the fact that their ID cards and things don’t work the way they used to as well. So the way you solve this problem is that the party leadership, now, whether that’s Joe Biden or formerly Nancy Pelosi or Chuck Schumer, any of these people, they have to start saying this is not an issue of compromise. The rhetoric has to start there. It has to say voting rights is fundamental. This is not something we can negotiate.”