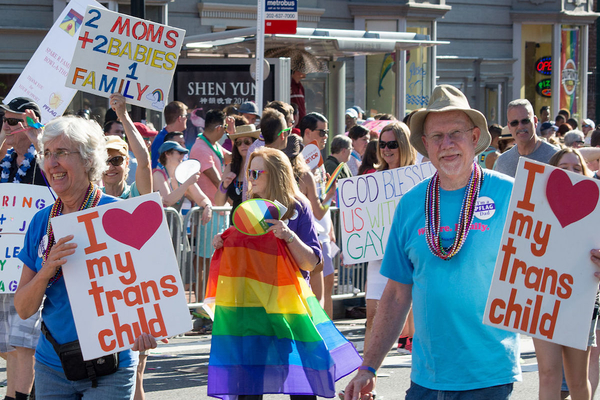 (breitbart) – Progressives are defending their in-school manipulation of kids’ sexual development by smearing the worried parents as conspiracy theorists.

The smear helps progressives to keep the large bloc of non-political, non-confrontational parents from recognizing the long-term damage caused by the progressives’ K-12 sexual re-education camps.

The switch-and-smear defense is spotlighted by an Associated Press fact check, posted April 13.

The AP article distorted the public’s strong support for Florida’s new law, which seeks to block teachers from pushing pro-transgender and other sexual claims on kids before the fourth grade.

The AP distorted the debate by ignoring mainstream worries about classroom manipulation and instead spotlighting the online, uncoordinated criticism of Disney’s opposition to the child-protection law.

This spotlight shift from schools to Disney allowed the AP to portray mainstream supporters of the law as conspiracy theorists who are worried about “grooming” for sex with Disney managers and third-grade teachers:

Online posts are using flawed logic and false information to malign The Walt Disney Co. as sympathetic to pedophiles or predatory toward young children after the company publicly opposed a Florida bill banning instruction on sexual orientation and gender identity in kindergarten through third grade.

CLAIM: Disney has close ties to the disgraced financier Jeffrey Epstein and his ex-girlfriend Ghislaine Maxwell, who was convicted of luring young girls to be sexually abused by him.

CLAIM: Disney’s decision to incorporate LGBTQ themes and characters into its content shows that the company is “grooming” children to be gay.

THE FACTS: The term “grooming” is being used on social media to undermine Disney’s diversity initiatives, a tactic that also has been used at school board meetings across the country by parents who oppose discussions of sexual orientation in schools. But that’s a departure from the commonly understood meaning of grooming, according to experts, who say the term refers to specific tactics that sexual abusers use to initiate contact with their victims.

“Incorporating LGBTQ characters into Disney programming also isn’t done to coerce a child into illegal activity. That would be a necessary feature to define someone’s behavior as grooming, according to William O’Donohue, a psychologist who studies child sex abuse at the University of Reno,” the article added.

Despite what AP claims, the political debate is being driven by parents who worry that teachers are eager to manipulate their children’s sexual development for ideological reasons, not for sex.

Those fears are fuelled by teachers who openly declare their wish to manipulate the schoolkids’ understanding of sex:

Many of these teachers have their own non-sexual reasons for manipulating children, such as a desire to win praise from other progressives:

Or imposing their own psychological problems on innocent kids:

Some teachers are also looking for the kids to validate their life-changing, body-reshaping choices to life as members of the opposite sex:

The politics of the groomer vs manipulation view was described by Ross Douthat, a centrist op-ed writer in the New York Times.

Douthat sketched the debate over the Florida law as: Progressives view the law as a heavy-handed “Don’t Say Gay” government intrusion into kids’ classrooms, and conservatives see the law as a vital curb on manipulative teachers eager to change the sexual development of children.

That political fight will be won by the faction that wins over the many non-political, non-confrontational parents who like their kids’ teachers and who see K-12 transgenderism as a teenage fad, he wrote:

To the extent that the law, and other potential laws like it, is understood primarily as moving schools [and teachers] to a neutral position in these [sex] debates — by keeping [pro-transgender] gender-identity curriculums out of K-3 classrooms and requiring schools to keep parents mostly informed about their teenagers’ self-identification — it’s likely to be politically popular. And, indeed, in some recent polling, there is majority support for the provisions in the law that seem to aim in this direction.

This swing-vote group may also move towards the conservative side if it fears that the transgender fad may inflict permanent harm on their children:

The moderate position sketched above, the wait-and-see, kids-are-experimenting approach, is plausible to the extent that teenage exploration takes the form of dating both sexes, using a different pronoun or name, changing a wardrobe. But it collapses quickly if the choice is for or against a path of treatment that even advocates concede moves to stages that are only “partially reversible,” and then sometimes “not reversible,” within adolescence itself.

But if the law is viewed as unfairly imposing conservative values, then the middle group of non-political swing voters will lurch towards the loud progressives, Douthat said:

The deliberate vagueness of the Florida law and its invitation to lawsuits by offended parents also means that it could end being used to actively roll back gay rights or gay visibility — whether by pushing gay teachers into the closet or discouraging any discussion of sexual orientation in older grades … And since there isn’t any sign of a retreat from the widespread acceptance of gay people and relationships, this would likely turn the middle group against these kinds of laws, and make it easy for the [progressives].

The switch-and-smear tactic was pushed by the Washington Post on April 5:

In the charged debate over what and how children should learn about sexual orientation and gender identity, some mainstream Republicans are tagging those who defend such lessons as “groomers,” claiming that proponents of such teaching want children primed for sexual abuse. The argument draws on previous tactics adopted by the right to oppose the erosion of traditional gender roles at moments of societal transition, experts say. They point out that, while groomer rhetoric seems designed to appeal to fringe partisans, it is part of a conservative effort to foster a moral panic that will help limit how and what educators teach — by restricting history lessons, banning books, and curbing discussions of systemic racism and LGBTQ issues.

The Post also used a professor to suggest that the parents are manipulated by “white-nati0nalist” racists and by religious fundamentalists:

Sophie Bjork-James, an assistant professor at Vanderbilt University who studies evangelical politics and the white-nationalist movement, said the religious right has advanced similar lines of argument in the past. In the 1980s, for instance, when women were entering the workforce in large numbers and placing their children in day-care centers, she said, some Christian conservatives drove what became known as the “satanic panic” — the false alarm that day cares were sites of satanic ritual and sexual abuse.

“It’s a strategy to unify the right,” Bjork-James said of groomer rhetoric. “Both White evangelicals but also the more radical right like QAnon supporters — for a while that movement was really focused on saving children from purported sexual predators, so it’s a clever strategy.”

A Washington Post report on April 14 used a flawed poll to argue that the public protests: “There are some genuinely angry parents, but the school panic has been planned and promoted by powerful right-wing interests and media outlets.”

In reality, the pushback against progressive teachers is based on justified fear of pro-transgender curricula and manipulative teachers, not of direct sexual molestation:

Of course, it is also true that some teachers groom the children placed in their care. — and many of those teachers are quickly caught and jailed amid much applause.

The sexual exploitation of students is a worldwide problem. In the U.S., the problem is three-fold: (1) Ten percent of public school students report being sexually abused by a school employee. (2) There is little in the existing research that identifies and describes the school culture, patterns, and conditions in which educator sexual misconduct occurs. (3) Because no one has systematically documented the school culture and the behaviors and patterns of adults who sexually abuse children in schools, school professionals fail to understand what patterns and behaviors should trigger concern, supervision, investigation, and/or reporting …

And it is also true that some schools and some teachers around the nation blur the boundary between progressive sexual reeducation and actual sexual grooming:

This teacher was quickly fired by his school when he appeared to cross over from legal indoctrination to grooming:

And, of course, there’s plenty of creepy online material being shared by teachers and various sexual pressure groups:

The Libs of  Tik Tok site seems to have an endless parade of progressive-trained young women who are eager to train other people’s children in the progressive sexual worldview:

And the site also shows a small part of the damage caused by progressive teachers’ manipulation of  school kids: