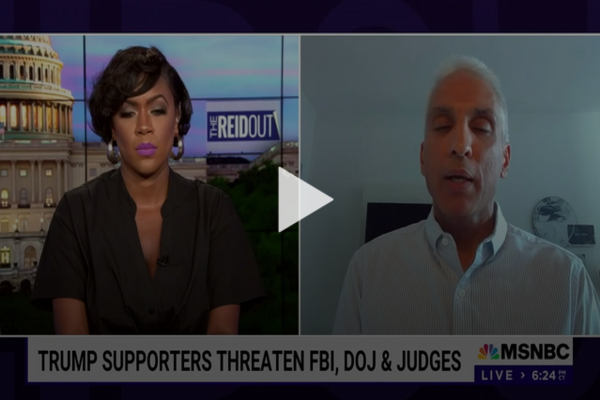 (breitbart) – Thursday on MSNBC’s “The ReidOut,” network host Tiffany Cross warned that “a civil war is here” amid violent rhetoric regarding the FBI.

Cross suggested it was time to start “preparing for actual violence” because two people tried “to declare war with FBI field offices.”

“You have millions of people tuning into a propaganda network every night,” Cross outlined. “And then, as if that were not bad enough, that’s an extremist network itself, you have these fringe pop-up outlets from OAN to Newsmax, then you have the social media component. That train has left the station. There is no let’s deal with the rhetoric. At this point, I do think we have to have serious conversations around preparing for actual violence.”

She added, “People keep saying a civil war is coming — I would say a civil war is here. And I don’t mean to be hyperbolic. We can look at what has happened just in the past week alone since all this has happened. We’ve had two people try to declare war with FBI field offices. I don’t think, at this point, we’re going to pack up our bags and go home and sing kumbaya. So, from a law enforcement angle, what would you recommend the infrastructure of the country do? Because not everybody has the security of Capitol Hill.”