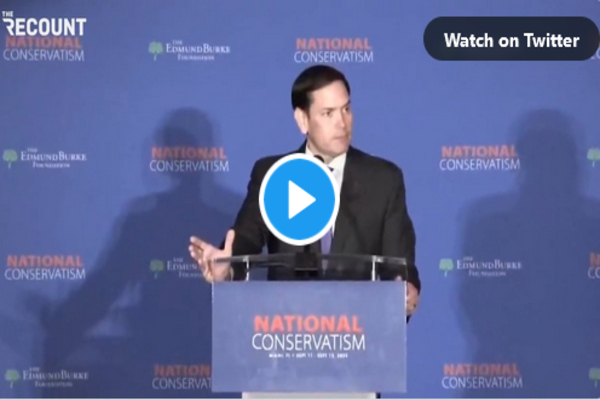 (breitbart) – The Recount, a leftist media outlet, this week accused Sen. Marco Rubio (R-FL) of unleashing a “transphobic attack” for stating the biological fact that men cannot get pregnant.

Speaking at the National Conservatism Conference in Miami, Florida, the senator — a keynote speaker at the event — warned that Americans are facing a barrage of absurdity at the hands of the radical left.

“Today we are subjected to things like there are such things as pregnant men. As of almost 10 o’clock Eastern Standard Time … as far as I know, every single human being that’s ever been born was born of a biological woman,” Rubio stated, noting that these dangerous and absurd ideologies are infiltrating aspects of everyday life– from corporations to federal agencies.

“And yet we have not just commentators, not just professors. We have the Centers for Disease Control, we have the some prominent public health agency in America who insists on using the term ‘pregnant people.’ Well, I can assure you that that’s never happened,” he added.

The Recount, a leftist media outlet, shared a clip of Rubio’s remark on social media, accusing him of unleashing a “transphobic attack” for simply stating the fact that men cannot get pregnant. What is more, the outlet claimed that Rubio’s statement is “factually inaccurate.”

“Locked in a tight race with Rep. Val Demings, Sen. Marco Rubio (R-FL) trots out a transphobic attack on the CDC for using the term ‘pregnant people.’ ‘Pregnant men … I can assure you that’s never happened,’ Rubio says, which is factually inaccurate,” the outlet said:

While leftists, including The Recount, contend that transgender men can get pregnant, at the end of the day, a transgender man is still a biological woman at her core. She just simply believes she is a man. The facts simply do not support the left’s anti-science claims.

Rubio continued, making it clear that the issue is more than just semantics, as it “moves from there to all kinds of other realms like the idea, for example, that children don’t really have to be raised by parents and families.”