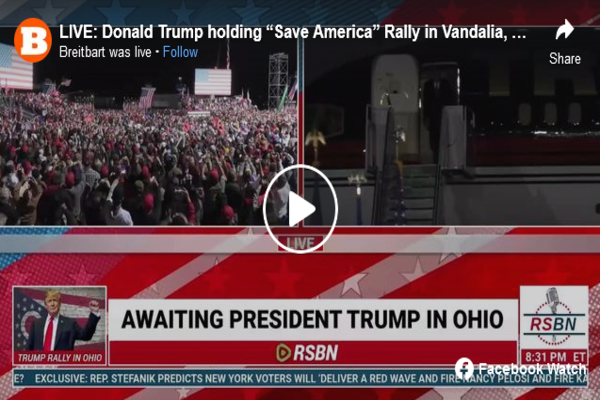 (breitbart) – Former President Donald Trump is holding a “Save America” rally in Vandalia, Ohio, on the eve of the 2022 midterm elections.

The rally is set to begin at 8:00 p.m. Eastern on Monday at Dayton International Airport.

Trump will be speaking in support of J.D. Vance, the Republican candidate for the U.S. Senate seat in Ohio, and other U.S. House candidates.

Trump went 16-0 in endorsements during the Ohio primary season in May.

The former president and Republicans are hoping to shift the Buckeye State further ‘Red’ after Trump won the state by eight points in both the 2016 and 2020 Presidential elections.

There are reports swirling that Trump has told allies he could announce a 2024 presidential run at Monday’s rally; however, it comes on the heels of other reports saying that Trump will wait until after the midterms to announce.