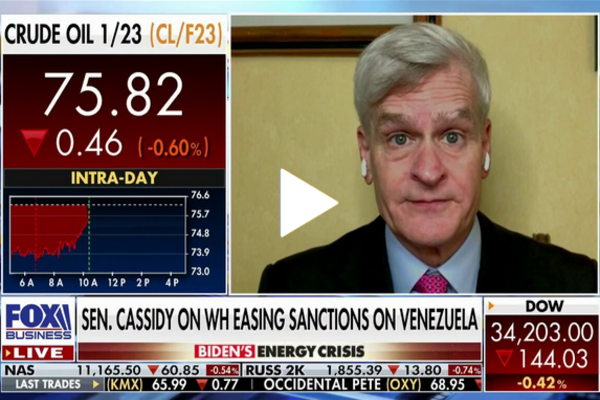 Cassidy said, “The administration just killed a loan to Guyana, which is right next door to Venezuela, a democracy, which has been an ally of the U.S. Instead of helping Guyana to build infrastructure to take advantage of what light sweet crude off their coast, incredible economic development for an ally, they killed that loan but at the same time they are helping the Venezuelans. This is wrong. If you want to support democracy, support the democracies already in place, by the way, including ours. There are a lot of Americans working in Guyana. It is a way to create jobs in the U.S. as you go down there. The administration doesn’t care about these jobs.”

He added, “It really is infuriating. You cannot separate energy security from economic security and national security and, by the way, from climate either. If we produce oil with our energy, with our environmental standards, it is less carbon footprint. It creates more jobs for the average American, better-paying jobs. It increases the national security and the security of the Europeans. This administration has chosen to focus only on carbon emissions, which means we get more carbon emissions. They’re burning coal in Europe because we can’t supply them with gas and oil. At the same time, we lose jobs here, national security weakens, economic security weakens. This administration, their energy policy is wrong on all fronts.”