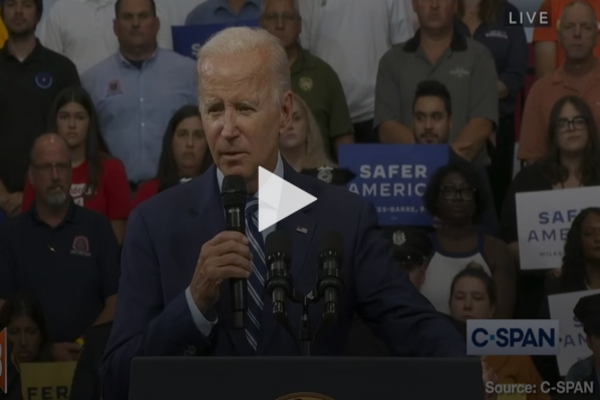 VERDICT: FALSE. There is no example of any Republican saying that, though some have warned that it may occur.

President Joe Biden told an audience in a speech on gun control and crime in Wilkes-Barre, Pennsylvania, on Tuesday:

A safer America requires all of us to uphold the rule of law. Not the rule of any one party, or any one person. Let’s be clear: you hear some of my friends on the other team talking about political violence and how it’s necessary. Think about this, now: Did any of you think — you’re as old as I am, you’d ever be in an election [where] we’d talk about it’s appropriate to use force, political violence in America? It’s never appropriate. Never. Period.

Biden went on to claim, without evidence, that Republicans are defending those who rioted in the Capitol on Jan. 6, 2021.

It is not clear who Biden is referring to.

Democrats and the media have obsessed in recent days over a warning by Sen. Lindsay Graham (R-SC), who said in a recent interview: “If they try to prosecute President Trump for mishandling classified information after Hillary Clinton set up a server in her basement, there literally will be riots in the street.”

But warning that there might be unrest over a double standard in law enforcement — as there was, with Democrat support, throughout 2020 — is not the same as saying that violence is “necessary” or “appropriate.”

It is, at best, a wild exaggeration to claim that Graham was actually advocating for violence; from the mouth of the President of the United States, that claim is arguably inflammatory in and of itself, as it may be used to justify violence by Democrats.

Perhaps Democrats do not want to acknowledge the perception among Republicans of a double standard, but the fact remains that an observation is not the same as a threat.

There is also no way credibly to argue that Republicans, whether Graham or anyone else, was advocating for, or justifying, political violence as “necessary” and “appropriate” as part of an election campaign strategy, as Biden claimed in Wilkes-Barre.

Opinion polls have shown varying degrees of support among ordinary supporters of both political parties for violence. In October 2020, Politico reported a poll that showed that roughly 4 in 10 supporters of both political parties were willing to justify the use of political violence in some circumstances. (The media focused on a similar finding among Republicans alone in the wake of the January 6 riot, though Democrats had been slightly more inclined to support violence a few months before.)