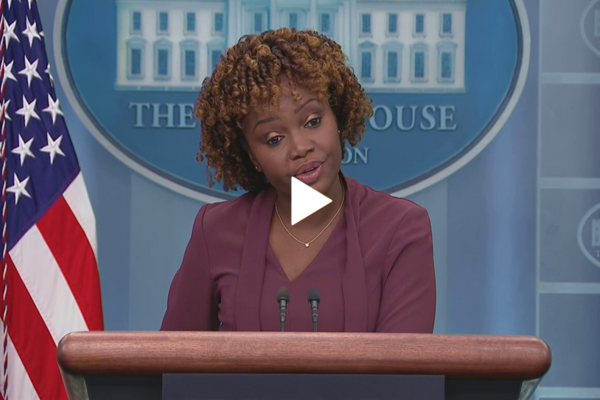 “It is incomprehensible to see — this block — that DeSantis has put forward. If you think about the study of black Americans, that is what he wants to block,” Jean-Pierre claimed during a press conference on Friday.

The White House Press Secretary then went on to complain about how Florida has also implemented anti-grooming legislation.

“These types of actions aren’t new. They are not new from what we’re seeing, especially from Florida, sadly. Florida currently bans teachers from talking about who they are and who they love,” she said.

Jean-Pierre was referring to Florida’s Parental Rights in Education law, which prohibits teachers from discussing sexuality and transgender ideology with children in kindergarten through third grade.

“It is incomprehensible,” she repeated.

“They have banned more books in schools and libraries than almost every other state in the country,” the press secretary further lamented of Florida.

Jean-Pierre was likely referring to DeSantis signing a bill last year that obligated all elementary schools to provide a list of every book available in their libraries, as well as mandating that school boards let the public know when they plan to approve new books.

Additionally, the legislation would allow anyone to comment, and any objections to the material would have to be reported to the state.

This move was made after DeSantis noted that Florida public schools were making sexually explicit books available to children. The governor’s aim in signing the bill was to give parents a say in which books can be in school libraries and which cannot, Associated Press reported.

Recently, the Florida Department of Education (FDOE) rejected the AP African American Studies course over its woke content, asserting that the course itself is “inexplicably contrary to Florida law and significantly lacks educational value.”

The College Board — which runs the SAT test and the AP program — launched the new AP African-American Studies (APAAS) course.

FDOE’s letter was addressed to Brian Barnes, Senior Director, College Board Florida Partnership, and serves as what the department calls a confirmation that the FDOE “does not approve the inclusion of the Advanced Placement (AP) African American Studies course in the Florida Course Code Directory and Instructional Personnel Assignments (adopted in State Board of Education Rule 6A-l.09441, Florida Administrative Code).”