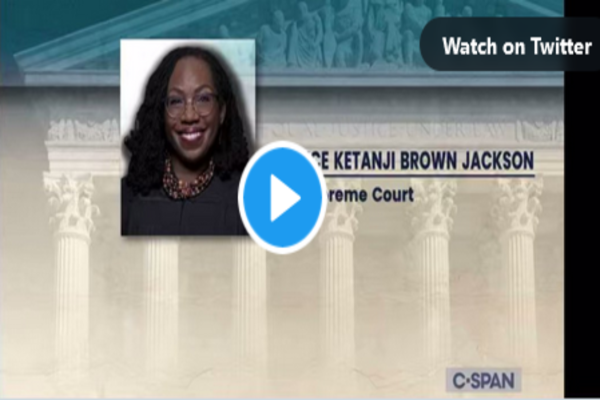 (breitbart) – Supreme Cout Justice Ketanji Brown Jackson used her second day on the nation’s highest court to make a bizarre “originalist” argument that claimed that since the post-Civil War Amendments were meant to benefit former slaves, they justify “race-conscious” policies.

The Court heard oral arguments in Merrill v. Milligan, a fight over redistricting boundaries in Alabama. Left-wing groups challenged the new map, arguing that it only guaranteed black voters, 28% of the population, one “majority-minority” district our of seven total.

Alabama argued that there was no way to draw another set of districts to create another “majority-minority” district without violating the 14th Amendment’s Equal Protection Clause, because it would require state legislators to make race the primary boundary factor.

In addition, the state argued that under a test established by the Thornburg v. Gingles precedent in 1986, a proposed district map has to be race-neutral. It added that the alternative map proposed by the plaintiffs broke up other “communities of interest” in the state.

Justice Jackson, who used much of her question time to test her own theories rather than to elucidate responses from counsel, tried to argue that because the legislators who drafted the 13th, 14th, and 15th Amendments after the Civil War had intended to help black people, an originalist interpretation of those amendments would approve the use of race-conscious policies to create equality.

That defies the common understanding of the Equal Protection Clause, and Alabama pointed out that the way the 14th Amendment was meant to help black people was by ending racial discrimination, not by creating new race-based policies. Alabama also argued that the only situation in which the use of race to redraw maps was allowed was when race had been improperly used to draw them.

“The framers themselves adopted the equal-protection clause [of] the 14th Amendment, the 15th Amendment, in a race-conscious way,” [Justice Jackson] said. The 15th Amendment protects the right to vote regardless of “race, color or previous condition of servitude.”

[Alabama Solicitor General Edmund] LaCour responded that “the 14th Amendment is a prohibition on discriminatory state action. It is not an obligation to engage in affirmative discrimination in favor of some groups vis-à-vis others.”

Justice Jackson has attempted to use “liberal originalism” since her confirmation hearing, when she used originalist arguments in an attempt to show that she understood the dominant conservative theory of jurisprudence — and perhaps to disarm GOP opposition.

The justices seemed skeptical of Alabama’s case — including some of the conservative justices — because it seemed to ask the Court to rewrite the Gingles precedent. Alabama contended that the Equal Protection Clause should apply to the Gingles test as well.