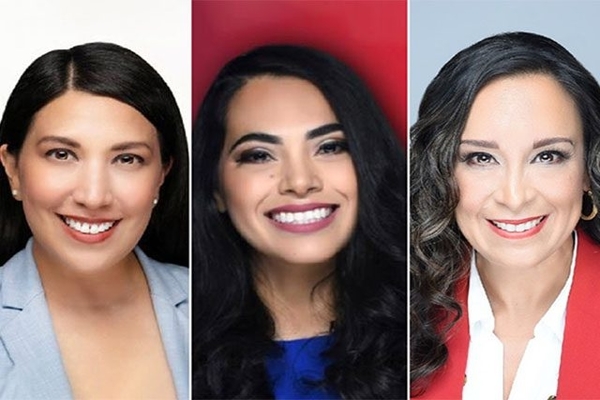 (breitbart) – Republican Mayra Flores’s special election victory Tuesday is the latest of the mounting evidence that Hispanic voters are inching away from the Democrat Party.

Now she, along with two other Republicans, Cassy Garcia and Monica De La Cruz, have found themselves at the forefront of an undeniable national trend as they work to redden the three districts covering Texas’s southern-most point.

“The red wave is here,” Garcia told Breitbart News on Friday. “Now more than ever Hispanics feel a genuine sense of belonging with the GOP. We know Hispanics are conservative on education, on social issues. We’re pro-life and pro-gun. We want lower taxes, religious freedom, and school choice.”

Garcia grew up as a Christian conservative in South Texas, worked for Sen. Ted Cruz’s (R-TX) office out of McAllen, and is now aiming to unseat Rep. Henry Cuellar (D-TX) in the state’s 28th District.

The district leans blue and includes part of the Rio Grande Valley border sector, typically the nation’s busiest border sector. That sector in May saw an average of about 1,500 illegal border crossings a day, which is crisis-level and consistent with a pattern of swelling illegal migration seen under President Joe Biden.

In addition to inflation, Garcia said controlling the border is a critical issue for those she is hoping to represent.

“I understand the needs, the real needs here and processes, and especially what’s happening at the border,” Flores told Breitbart News in March. “We have people in Congress here in South Texas that are fighting for California values, that are, you know, fighting for Austin values and not South Texas values, and we need real representation.”

Critics have dismissed Flores’s victory as a mere temporary blow for Democrats. The 34th District’s new congressional lines, which go into effect in the upcoming midterms, are substantially bluer than when Flores ran in the special election, and she will face a well-funded incumbent, Rep. Vicente Gonzalez (D-TX), in that race.

The Republican counterpart to Maloney’s group, the National Republican Congressional Committee (NRCC), envisions a different outcome. The group has deemed all three South Texas districts as winnable for the GOP and released an ad this week dubbing the candidate trio a “triple threat.”

NRCC spokesman Mike Berg said he believes “Hispanic voters are abandoning the Democrats because of their destructive policies,” citing inflation, crime, and the border crisis.

De La Cruz, who is endorsed by former President Donald Trump and running in a toss-up district, said she shares the view that the three candidates are “a triple threat to the Democrat Party” and credited their surging momentum in part to the resources Republicans at a national level have poured into elevating them.

De La Cruz’s district includes some of Hidalgo County and the border city of McAllen, both of which have an almost entirely Hispanic population.

Before the three South Texas women took the spotlight, Hidalgo provided one of the first warning signs for Democrats that they did not have the grip they had perhaps anticipated on Hispanic voters.

Trump lost Hidalgo by 41 points in 2016, but he lost by just 17 in 2020, indicating Republicans had started to make significant inroads there. Then, leaving no question that Democrats had reason for concern, McAllen residents elected a Republican mayor, Javier Villalobos, in 2021.

Rep. Diaz-Balart (R-FL), who has worked in Florida politics for three decades and represents a red, Cuban-heavy section of Miami, observed the Hispanic voting bloc, especially in southern Florida, is vastly diverse. In addition to Mexican and Cuban Americans, his constituents come from places like Venezuela, Colombia, the Dominican Republican, and Nicaragua.

Trump just barely edged out Hillary Clinton by less than two points in Diaz-Balart’s district in 2016. But, similar to what happened in Hidalgo, Trump saw a commanding 23-point victory over Biden there in 2020.

Diaz-Balart said, “It’s obviously the fact that the Democratic policies have been so destructive, but also … Hispanics are not socialist. They’re not Marxist.”

Diaz-Balart, who chairs Republicans’ Congressional Hispanic Conference, pointed to the challenge he has seen that Democrat talking points, especially about the border, have been “pretty” compared to that of Republicans, but he added that Hispanic voters are coming around.

“All they hear is Republicans are horrible and Democrats are apple pie,” he said. “It hasn’t taken long for the community here to go, ‘Woah, wait a second. That rhetoric doesn’t match the reality.’”

Diaz-Balart has been dedicated to spreading “the message of what the Republican Party actually stands for, not what the left says we stand for,” he said. “Getting that out is something I’ve been working on for a long time, and I think Florida’s the model.”

In an indication that financial investments in the Hispanic population are growing, both Diaz-Balart and Rep. Tony Gonzales (R-TX) launched a political action committee last month called the Hispanic Leadership Trust with the goal of bolstering Hispanic Republicans’ presence in Congress and drawing Hispanic voters to the GOP.

Gonzales told Breitbart News in a statement he believes Democrats have “taken Hispanic voters for granted.”

“They thought Hispanics would just show up in droves for them so long as they played identity politics, even if that meant totally ignoring what Hispanics value,” Gonzales said.

While Garcia and De La Cruz locking in their nominations was eye-catching for analysts watching this trend, Flores’s win was striking. RealClearPolitics’ Sean Trende compared the seat flip to West Virginia’s dramatic switch from a solid blue state to a solid red state in the Obama era.

“This is sort of how I felt seeing some of the shifts in Appalachia in 2010, or blue collar areas in 2016. Except this I genuinely didn’t think I’d see for another 20 years or so. Just astonishing,” he wrote on social media.

One Democrat-aligned firm’s post mortem report after the 2020 election highlighted the Hispanic shift. The report identified Biden’s underperformance in certain “Hispanic-heavy geographies” of not just Texas and Florida, but also Nevada, Wisconsin, New Jersey, and Massachusetts.

The firm stated in the report that it needed “more time to unpack” the reasons for the Democrat losses among Hispanic voters, but it vaguely acknowledged such voters were attracted, in part, to Trump’s positions on the economy in the midst of coronavirus shutdowns.