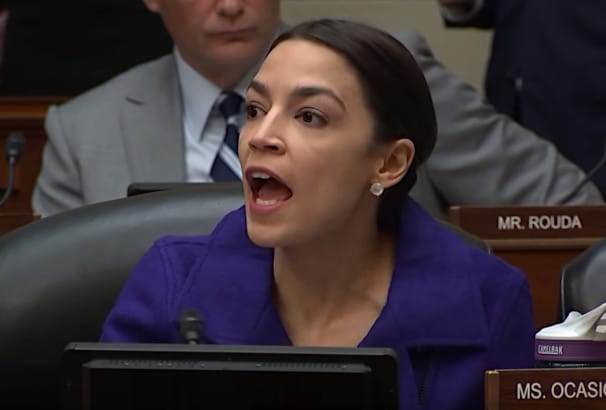 (breitbart)- Rep. Alexandria Ocasio-Cortez (D-NY) has sounded the war drums against moderate Sen. Kyrsten Sinema (D-AZ) over her refusal to kill the filibuster after Politico published a leaked Supreme Court decision that could signal the end of Roe v. Wade.

In a tweet posted Tuesday, Ocasio-Cortez called Sinema an “obstructionist” and called for her to be primaried in Arizona.

“We could protect Roe tomorrow, but Sinema refuses to act on the filibuster,” she wrote. “Until that changes, she can take a seat talking about ‘women’s access to health care.’”

“Hold everyone contributing to this disaster accountable, GOP & Dem obstructionists included. She should be primaried,” she continued.

Sinema released a statement Tuesday condemning the leaked Supreme Court decision, while refusing to shift her stance on killing the filibuster.

“Protections in the Senate safeguarding against the erosion of women’s access to health care have been used half-a-dozen times in the past ten years, and are more important now than ever,” she said.

“Throughout my time in Congress, I’ve always supported women’s access to health care, I’m a cosponsor of the Women’s Health Protection Act, and I’ll continue working with anyone to protect women’s ability to make decisions about their futures,” she added.

AOC also took aim at moderate Sen. Joe Manchin (D-WV) on Tuesday for his refusal to kill the filibuster.

“Manchin is blocking Congress codifying Roe. House has seemingly forgotten about Clarence Thomas. These 2 points must change,” she concluded.

Democrats, in general, are smeared the ruling and used it as a rallying cry for the upcoming midterm elections.

“If this report is true, this Republican attack on abortion access, birth control and women’s health care has dramatically escalated the stakes of the 2022 election. At this critical moment, we must protect and expand Democrats’ Senate majority with the power to confirm or reject Supreme Court justices,” Democratic Senatorial Campaign Executive Director Christie Roberts said in a statement.

Other Democrats such as Sen. Bernie Sanders (I-VT) took a more extreme path and called upon Congress to immediately pass legislation to codify Roe v. Wade by eliminating the filibuster.

“Congress must pass legislation that codifies Roe v. Wade as the law of the land in this country NOW,” Sanders tweeted. “And if there aren’t 60 votes in the Senate to do it, and there are not, we must end the filibuster to pass it with 50 votes.”