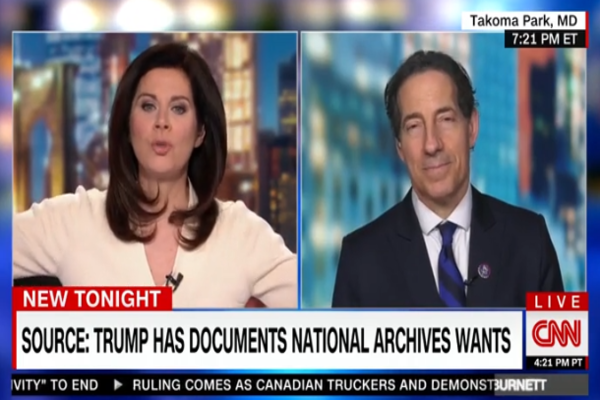 Anchor Erin Burnett said, “So you are going long in your investigation and all of the sudden, you find there is 15 boxes of documents at Mar-a-Lago, including letters from Kim Jong-un and who the heck knows what else? Some marked top secret, and you are thinking, well, if there is 15 boxes of stuff there, who knows what is anywhere? You know, it is really hard when you don’t know what you are looking for. Do you know at this point how much is missing?”

Raskin said, “Donald Trump has the same obligation everybody else we’re in touch with has, which is to turn over everything in his possession. The Presidential Records Act makes it clear that all of the documents that he transacted in as president belong to the American people. They don’t belong to him. He knew that. One of the committees I serve on, The Oversight and Reform Committee, sent letters to everybody in the Executive Branch, the heads of all the agencies and departments, to tell them, to remind them of the Presidential Records Act and remind them that it is a federal offense, it’s a crime to abscond with government property in that way. That is a point Donald Trump knew when he lambasted Hillary and said she should be in prison for doing far, far less than it’s clear he has already done.”