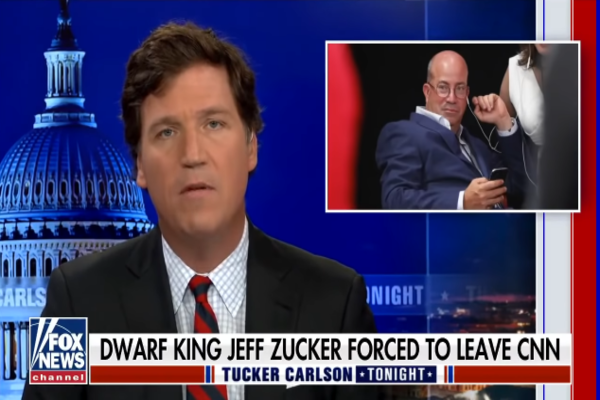 According to Carlson, Zucker’s supposed indiscretion was well known, which made it difficult for Carlson to accept. The FNC host speculated it had more to do with other reasons, including bad ratings.

CARLSON: You probably heard CNN President, Jeff Zucker, got fired this morning. In a statement, Zucker said he has been dating a colleague, didn’t disclose it, and when his bosses found out, they made him leave. That’s not true.

Everyone in the TV business already knew about Zucker’s relationship with the head of CNN’s Marketing Department. Every executive in television has known about it for years, it was definitely not a secret. So Jeff Zucker did not get canned for his sex life. New management wanted him out of CNN for other reasons, including bad ratings, and maybe others that we’ll find out later.

So the relationship was just a pretext for what you saw. But as usual with CNN, you’ve got to wade through a lot of lies to get to what actually happened. So what happens next at CNN?

Well, for starters, let’s hope to get rid of the eunuch and his weird pop-eyed accomplice. The two have made a career of trying to kill free speech in this country. No news organization should ever employ people like that. It’s disgraceful.

As for who replaces Jeff Zucker, we hope it’s someone better. CNN is poison, we want that channel to improve. With Zucker gone, it’s at least theoretically possible it could happen. We didn’t like Jeff Zucker, we said that very clearly, for a long time. We attacked his programming decisions, we slammed his political agenda, we called him names, and we meant every word of it.

Still, on this day, when we should be celebrating Jeff Zucker’s departure, we’re not celebrating. Why is that? Because we see a pattern here.

There are an awful lot of contemptible leaders in Corporate America, maybe most of them, but only a certain kind of CEO ever gets fired. It’s not the weak ones, the guys who do what they’re told, issue the cringy statements and let the H.R. Department run everything, those people tend to keep their jobs until they retire. People like that just want to get it over with and cash out.

They don’t take risks. They don’t dare to build anything. They’re just caretakers. If their dignity is the price of job security, they are happy to pay it.

More than at any time in our history. America is run by people like that. It’s only the strong who are punished. Strong leaders tend to be abrasive. They’re arrogant. Sometimes they’re what we now call abusive. They ignore convention, they say outrageous things in public and private.

They don’t blend in with the group. Often, they alienate the more sensitive types around them. They don’t have maternal instincts. A lot of modern people are put off by strong leaders, but you’ve got to have them. Creative masculine energy is the essential quality in any civilization. It’s how we got civilization in the first place.

But increasingly, boisterous masculinity is systematically suppressed to make way for a timid caretaker class, for people who think the whole point of society is to get to zero COVID infections or eliminate all traffic deaths.

Those may sound like virtuous goals. In fact, they’re signifiers of decline. Not dying can never be the whole point. If it is, you’re already dead.

Our current leaders are fearful because they are old, but the opposite is also true. They kept power into their 80s because they put safety first. They put it over creativity, over courage, over leadership. Nancy Pelosi never built anything, neither has Joe Biden or Mitch McConnell. They’re not capable of building anything.

At the very best, they can preserve what others have built, not that they’ve even tried to do that.

So Jeff Zucker, whatever else we have said about him and meant, Jeff Zucker tried to do something new. We hated what he did. We did not share his vision. We found it repugnant and destructive, but at least Jeff Zucker had a vision. Too few still do.