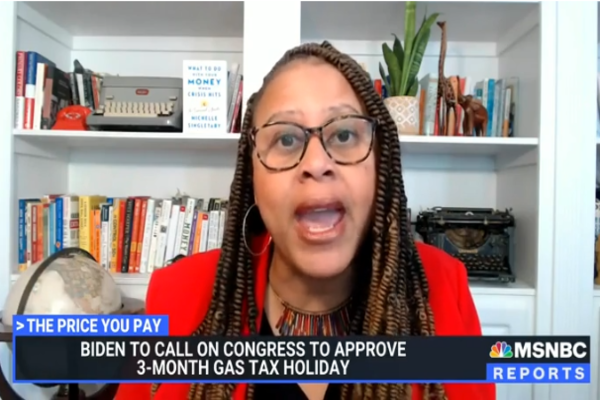 (breitbart) – Washington Post columnist Michelle Singletary said Wednesday on MSNBC’s “Chris Jansing Reports” that many Americans were “not suffering” as much as they think from inflation.

She urged them to “calm down.”

Jansing said, “Well, you speak about those folks who are living paycheck to paycheck, and there’s a new poll out by Politico Morning Consult that I think is quite revealing. 38% of  Americans would rather see a recession than the inflation we’re dealing with.”

Singletary said, “You know, I’m just going to say this. If I get dinged for it, I don’t care. There’s a great deal of Americans where it is uncomfortable they’re spending more, but they are not going to go under. You know, you got to stop complaining when there’s so many people who literally the inflation rate means they may only have two meals instead of three. There are Americans who did extremely well in the last two years in the market. You still have your job. And yeah, it’s costing you more for gas, but guess what, you’re still going to take that Fourth of July holiday vacation. You can still eat out. So I’m going to need you to calm down and back off. It feeds into this fear, and people making decisions that create the very thing they’re fearful of. And you’re in that category, calm down, stop looking at your portfolio. You know what you can do with that energy? Help people, put food on the table of somebody else’s house because you have extra.”

She continued, “Now, the other half of America, anything that we can do to help them to get to the job that they need to keep to put that food on the table, those are the folks that we need to concentrate on. If they are responding, saying they’re afraid, I get that. But overall, many Americans are not suffering as much as they think they are. We can think things into existence because we are unrealistically fearful of something that hasn’t happened yet. We don’t know if we’re in a recession yet. Inflation is high, but it’s high for a reason. We just came out of a pandemic where if you got COVID, you weren’t sure you were going to live.”

Singletary added, “You know, listen, I got three young adults trying to make it in the world, so I’m right there. I came from a situation where I know what it’s like to literally be hungry. Not the kind of hunger where you open up the fridge where there’s food in there, and you say there’s nothing to eat. I feel both sides. I’m trying to calm myself down and trying to help other people realize what can you do and what you can do is continue to save. If you don’t need to drive, don’t drive. If you can put off a project, put it off. But if you’re in the position to eat at the restaurant, even if the meal is a little bit more, go eat at that restaurant and help save a business that is still trying to limp through the pandemic.”